St George’s Church Morden is searching for the relatives of four World War II servicemen after helping to save their local memorial, which will be unveiled in the church on Remembrance Sunday.

The memorial plaque commemorated Gerald Rodgers, Percy Brown, Lawrence Frost, and Derrick Wood, who lived on the St Helier estate Morden and died serving their country in World War II.  Made from wood and brass salvaged from a battlefield, the war memorial was originally displayed in Farm Road Church, but was nearly destroyed.

When the church closed in 2014, the building in Morden was threatened with demolition. The management committee feared that the memory of the men would be lost. They therefore approached St George’s Church, which agreed to help save the memorial and install the plaque in its building in time for Remembrance Sunday.

The church wanted to find out about the men and invite their relatives to the reopening of the memorial and so turned to social media for help.  With three photographs and some basic biographical information from the Commonwealth War Graves Commission, the appeal for information resulted in an early success and a surprise.

The surprise came from a contact who showed from several archives that the surname of one serviceman had been misspelled on the memorial. Gerald’s surname had been engraved as ‘Rogers’ on the plaque, but was actually spelled ‘Rodgers’. Apparently, such spelling errors are not uncommon on war memorials.

The success came on the second day when contact was established with a relative of Lawrence Frost.  She said that Lawrence’s sister, Rosetta (95), is still alive. “Laurie” was killed two weeks after receiving news that his daughter had been born on Christmas Day in 1944. The Wellington bomber that he was co-piloting was shot down by a U-boat, killing all of the crew except the pilot (military report).

Trevor Taylor, Warden of St George’s Church, said “I was particularly pleased that we were able to help save the memorial, as we had always enjoyed a close relationship with the congregation at Farm Road Church. Fortunately, our appeal for information met with an early success in that contact with Lawrence Frost’s family. I would appeal again for any information regarding the other men or their relatives. “

The memorial will be unveiled at the St George’s Church Remembrance Sunday service in Morden on 13th November at 10.30am.  Visitors are welcome.  The church will apply to the Diocesan Advisory Committee (DAC) to have Gerald’s surname correctly recorded alongside the memorial. Private Rodgers was 19 years old when he died.

Information on the men and updates on the search for their relatives can be found at stgm.uk/CommemoratingPrivateRogersAndPals.

Images of three of the servicemen, Trevor Taylor by St George’s Church, and the old Farm Road Church are available for publication with this story under a Creative Commons Attribution Licence. See below.

St George’s Church is part of the Parish of Morden in South London, which includes St Lawrence Church, Emmanuel Church and St Martin’s Church. It is part of the Church of England in the Diocese of Southwark and is located on Central Road in Morden (SM4 5RJ). 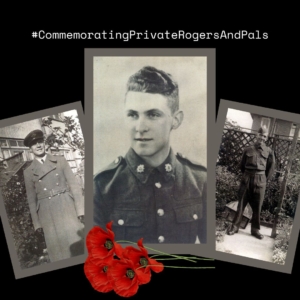